GETTING ACQUAINTED WITH − Amanda Gris and Maximiliano Carroz

One year ago, my partner and I participated in a tango seminar in our hometown Turku, given by the young maestros Amanda and Maxi from Buenos Aires. We very much liked their inspiring and precise way of teaching, and when informed of their comeback in the spring of 2016, we were in the front row to enroll for both their seminar and for a private lesson.

Not only were their classes − again − a pure joy to attend, but we also had the fortune to become even better acquainted with this charming couple, as they kindly accepted an invitation to pay a visit at my home.  Our two-hour long chat not only strengthened our perception of their sympathetic characters, but revealed many delightful details from both their professional and personal lives − to be disclosed for the readers of this blog!
ON THE RANCH
Amanda was born in Buenos Aires and grew up in the Villa Crespo district, but she developed a strong link to the countryside since her childhood. Her grandfather owned the ranch Los Corrales Felicia Santa Fé, situated 500 km from Buenos Aires, and there Amanda and her two female cousins would spend their summer vacations and other holidays, as well as a number of weekends.

Amanda adored her grandfather, who "treated us like princesses".  One activity of the ranch was to train horses for races. The cousins learned horse-riding, and their grandfather would join them on long horse rides. In the local community, the grandfather was very respected, because of his honest personality and correct manners. "Those are attributes that I have learned to value highly", Amanda concludes.  Sadly, the grandfather passed away 5 years ago, but Amanda´s father now runs the farm − alongside his occupation as a lawyer.

Maxi was born in the capital of Córdoba. At the age of 5 he moved with his family to the community of San Marcos Sierras, which situates 120 kilometers from the city of Córdoba, and is "too small to be found on the map".  Like elsewhere in Argentina, in the 1600´s  the Spaniards took over the territory [at that time named Tay Pichin], and started to grow olives.  Unlike elsewhere in Argentina, in the 1800´s the territory was returned to the original inhabitants, who continued the cultivation of olives. Today, in his Quintas, Maxi´s father is the producer of a refined brand of olive oil.

"My family on my mother´s side were tango people", Amanda tells me. There were milongueros and bandeonistas, and she remembers that her grandmother used to talk about tango.  Although Amanda was fond of Rock´n´Roll, that was rather for listening only. "My dance was always tango", she recalls. At the age of 14, she decided to go to tango lessons, and for 2 years she attended a local class in Villa Crespo. She recalls having been more interested in the music than in the dance, which for her was "just a game" − until she found Rodolfo Dienzel´s studio.

"I was 19 years old, when I started in ´Cacho´ Dienzel´s classes, and I stayed for 9 years", she tells me. "He was a magician, who gave you a lot of confidence". Amanda recalls never having felt doing anything wrong ["There are no mistakes, only new possibilities"]. Dienzel promoted an active role for the woman ["The woman has the power"]. Early on, Amanda ["La Nena"] was assisting Dienzel in the tango classes.
Amanda describes her deep devotion for ´Cacho´ by saying "he was like my second father". The death of Rodolfo Dienzel in January 2015 not only was a hard blow, but also included a strange event. "I was abroad, and dreamed that my father had died. When I wake up, my cellular phone was loaded with messages of the death of ´Cacho´.

TANGO − MAXI
Maxi´s road to tango was more variable − and flavored with serendipity. Having Indian roots, it is no surprise that Maxi´s dance career started with Folklore, at the age of 6. To put it in the words of Amanda: "Maxi has Folklore in his blood". He attended the local dance school Ballet Folklorico Tay Pichin, and in addition to Folklore also trained in Ballet, Yoga, Tai Chi, and Aerobics. The curriculum also included a kind of choreographed Tango − of which he does not recall much.
At the age of 24, he had been working 5 years in his home community. One day, as he was playing on his guitar and his drums, he started to contemplate seriously on his future. "I decided, that my way is dance" − and he made the decision to move to Buenos Aires, to "learn real tango".
Friends in Buenos Aires had told him to contact them, if he ever came to that town, so he was confident to find somewhere to go. However, as he recalls "I arrived in Buenos Aires at 9 a.m., and started calling friends, but not until 4 p.m. did I get contact with a friend who promised to lodge me for the first 2 weeks". He managed to get an appointment to teach Folklore in Caminito, in San Telmo. "I was living in Belgrano, and working in San Telmo", he recalls with a grimace.


Maxi began to explore tango under the guidance of Jesus Velazquez, Anita Postigo, Pablo Villarraza, and Pancho Martinez Pey, among others. One day, when he was about to return to San Marcos Sierras for the summer season, he by chance met Stella Dettoni  in the Corrientes street, where the DNI-tango school resided at that time. This encounter led to a 5 year long stay with the DNI, where Maxi not only studied tango, but also gave yoga lessons, worked in the bar, took care of the plants, and later (from 2008) also gave tango classes. "My first performance was with Carina Quiroga, who now resides in Tampere in Finland", he recalls.

In 2011 his friend Jorge Muscia urged him to broaden his tango horizons, saying that Maxi "lived in a single bubble", and naming teachers like Carlos Perez, and Roberto Dienzel. Maxi choose to go to the Dienzel studio. He summarizes the differences between the DNI-tango style and Dienzel´s method as one between "circular" and "linear" dancing. The former style also used more flexion and couple separation than the latter.

TANGO - IN COUPLE
Amanda points out that "Dienzel was famous for coupling dancers into pairs". As examples she mentions Milena Plebs & Miguel Angel Zotto, and Jorge Firpo & Aurora Lubitz − adding that "we were Dienzel´s last match!"

In 2013 Amanda and Maxi started to dance in couple. "It was a disaster", Amanda recalls, since their dancing styles still differed a lot. Maxi agrees with this memory, laughing. To sort out the differences, they started to take lessons from Carlos Perez, whose style they describe as representing "the middle of the road". For both Amanda and Maxi, Carlos Perez has become an authority in whose opinions they trust completely. They are proud that they will soon teach at the same tango festival as Carlos Perez & Rosa Forte.

TEACHING TANGO
In 2013 Amanda and Maxi held their first tango seminar, in Archangel, Russia. They recall that they were "fighting all the trip" about how to teach. Happily, the seminar was a great success. Until the present day, they point out, their curriculum has been constantly developing, and "it is not finished yet".

When I ask them what "tools" they use in their teaching, they list three main ingredients: (1) Lots of attention to details − much from the DNI experience, (2) Connection and improvisation − much from the Dienzel experience, and (3) Posture and musicality − from Carlos Perez´s teaching. In tango dancing they emphasize flexibility, and "to improvise all the time". They add, with that a smile, that they teach a bit differently in various countries, e.g. taking in account the level of introversion/extroversion of the students. And in classes with students at different levels of experience they try to "add something extra to the more advanced students".

GUITAR, OPERA, LAW & PRISON
With his Indian roots and Folklore background, it is no surprise that Maxi plays the guitar. And the fact that Amanda has Italian (and Swiss) roots seems to explain why, at the age of 16, she started to study opera singing − and emerged as a soprano lirica coloratura!
Rather more unexpected is the fact that Amanda has graduated as a Criminal Lawyer, i.e. a lawyer who specializes in criminal law. When she studied law, she was already dancing tango. "I was at the university in the mornings, in the prison in the afternoons, and rehearsed tango in the evenings", she remembers.

PHOTOGRAPY, VIDEOS
During the interview, Amanda and Maxi open internet links with beautiful pictures, taken by Amanda. She ascertains that photography is her hobby, but so is also the making of videos ["I always wanted to become a film maker"], and we watch an amusing video compilation from Amanda´s and Maxi´s first professional trip abroad.

Video from trip to Russia.


EN LA GATERA
This year, Amanda and Maxi have started to produce a weekly radio program, named En la gatera, on the Radio Guilpo in San Marcos Sierras. In the program they talk about tango and its history, and play music. This project, indeed,  is a perfect example of the broad talent of the couple. 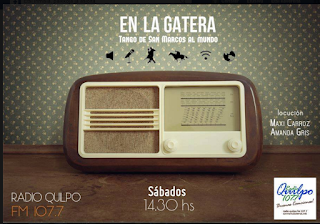 THE FUTURE OF TANGO
When I ask Amanda and Maxi of their thoughts on the future, they broaden my question to focus on the future of tango, itself. "We are coming back to the roots, and the so called Tango Nuevo seems to be disappearing", says Maxi. They welcome the growing number of tango musicians, and also point out the expanding number of tango teachers, both in Argentina and abroad.


Let me add − as a closing statement −  that more important than the number of tango teachers, is the number of excellent teachers − such as Amanda Gris and Maximiliano Carroz!